Warning: Parameter 2 to advanced_custom_search() expected to be a reference, value given in /home/customer/www/literacyapps.literacytrust.org.uk/public_html/wp-includes/class-wp-hook.php on line 303
 Alphamonster – Literacy Apps
Home
4 Years Old

You can buy a connected wooden alphabet that can play with the app (only for iPad, expensive at £49.99). Apps come free with the purchase of the wooden alphabet, including Vocabubble and Alphamonster. Children can interact and hear the letters sounded out as they touch the screen, words then appear which start with the letter, matching them to the wooden toys, where the screen reacts to them. Children are given a variety of options for learning letters, including dragging their own letter to a machine and being provided with a word starting with that letter, being given an object and having to choose the letter it begins with and hearing the letter phonetically and having to choose it. There is also a simple run through of letters and associated words, which are animated beautifully and are fun to watch. Great opportunities for parents and children to work together using the wooden toys. Available in five languages.

Hears and says the initial sounds in words
Links sounds to letters
Can begin to read words and simple sentences
Increased vocabulary and forms of speech which are influenced by books
Can segment the sounds in simple words and blend them. Can recognise some of the letters within this 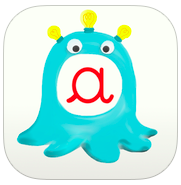