An alphabet game with a musical twist, every alphabet letter is part of a song. The more letters children touch the longer the song. Letters are sung out above music. If children begin to write words then they are highlighted and sung, if words don't make sense, they are still sung! Visually this app is also very stimulating for children. A really fun way to get children to hear the sounds of letters and how letters sound as they are blended together. Available in eight languages.

Other notable themes and features of the app include Bilingual, Letters, Multilingual, Music, No narrative, Open ended, Phonics, Words.

Hears and says the initial sounds in words
Links sounds to letters
Can begin to read words and simple sentences
Increased vocabulary and forms of speech which are influenced by books
Can segment the sounds in simple words and blend them. Can recognise some of the letters within this
Can segment sounds in simple words and blend them together
Uses some clearly identifiable letters to communicate meaning, representing some sounds clearly and in sequence
Writes own name and other simple things, such as labels 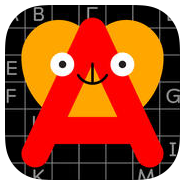